Units
/
Mindfulness
/
5.1 Introduction to Mindfulness
1. Ready
2. Set
3. Go
4. Assess
All done with this lesson? You can mark it as complete in your dashboard.
Go Now >

Students learn about the triune brain, what each evolutionary level of the brain is responsible for, and how mindfulness can help them calm their lizard brain. They then build a ‘calm down’ jar to visually represent mindfulness and serve as a reminder to practice mindfulness.

The brain is the most complex and perhaps also the most remarkable organ in the human body. But it is also the least understood organ. By thinking about the brain as three separate areas with distinct purposes, and which evolved at different times, students begin to understand the biology behind their behaviours and reactions. Having this fundamental understanding is necessary for students to not only be aware of how the brain controls the body, but to also recognize their ability to control the brain.

Similar to how the brain's complexity seems daunting, the abstractness of mindfulness makes it difficult to grasp. Creating the Calm Down Jar helps students understand the essence of mindfulness and serves as a visual reminder for students to practice mindfulness when emotions are high. 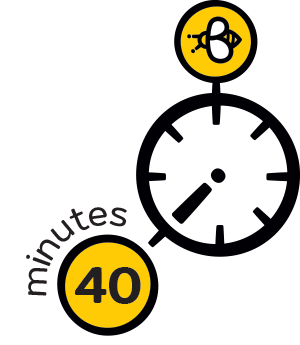 Start by telling students that, to understand how mindfulness helps them focus, calm down, and control their reactions, they must first understand how the brain evolved. Hold your arm up with your hand outstretched, as if you were preparing to give someone a high five (palm facing towards the class) and ask your students to follow along as well. Use your hand to explain the three evolutionary layers of the brain.

Tell students that the human brain can be divided into three distinct parts, based on function and period of evolution. Let students know that they can use their hand to represent each of these three parts in the following way:

Before moving on to the third part of the brain, explain that these two basic structures of the brain, the brainstem and limbic system, are often called the lizard brain because of how primitive they are. A lizard’s brain isn’t much more than these two structures, which ensure survival.

Now that students know the three parts of the brain, explain that, most of the time, the smart part of the brain reasons with and manages the lizard brain. But sometimes, when students are really nervous or caught up in their emotions, the lizard brain takes over, sending the smart brain scattering (at this point, pop your fingers up again to reveal the thumb). Remind students that the lizard brain wants them to do three things: fight, freeze, or flee. Then, ask students to think of an example of when their lizard brain took charge.

Finally, tell students that, when they are mindful (pause and take a deep breath), they bring their smart brain back to the scene (fold your fingers back over your thumb). With the smart brain present, students can distance themselves from the threat, take a deep breath, and respond in a thoughtful manner that considers the big picture (instead of instinctually reacting in a way that they’ll later regret).

Before moving on to the next activity, ask students if they have any questions about the three evolutionary layers of the human brain. Before the lesson, use the student instructions provided below to prepare your own Calm Down Jar, which you will show as an example.

Start by holding the jar very still and explaining that when it’s nice and calm, and students have their smart brain on, it’s easier to think clearly (as demonstrated by the fairly clear contents of the jar). But, when the reactive lizard brain takes over and students get consumed by fear, anger, sadness, or even excitement, it’s hard to see clearly and it’s hard to think clearly (shake up the jar and let the glitter float around). In this state, students' thoughts are probably all scattered and swirling around like the glitter in this jar (keep shaking the jar while you’re talking). Now, ask students to look at what happens when they pause, take a breath, and sit still (hold the jar very still). The glitter starts to settle.

Let students know that they can do the same thing with their brains when they’re feeling overwhelmed or out of control. If they take a moment to pause and find stillness, then the smart part of their brain can get back in control. When this happens, they can think and see more clearly. Inform students that mindfulness is a skill to help them find this stillness.

Tell each student that they will be making their own Calm Down Jar, which they can use to remind themselves to practice mindfulness. When they feel their lizard brain taking over, students can shake the jar. As students watch the glitter settle, they can take a moment to breathe and let their minds settle. They can find stillness and re-engage the smart part of their brain. Give each student a copy of the instructions as well as the necessary supplies: A plastic jar, a bottle of clear Elmer’s glue, a plastic spoon, and a small container of glitter (colour of their choice). Then, walk through the instructions with them.

Calm down jar instructions available in this page's download section.

After students have made their jars, suggest that the class practices finding stillness together. At the same time, every student can shake their jar. Then, take a moment of silence to breathe and find stillness.

Wrap-up this activity with the following questions:

NOTE: If it’s not possible to make a Calm down jar in class, give students the instructions and let them know that this is a fun activity to do at home. Make sure that you still make a Calm Down Jar ahead of time to use as an example.

How can I practice mindfulness?

There are so many different ways to practice mindfulness! Over the next couple of weeks, we will be spending some time practicing the most common techniques like mindful breathing, mindful eating, meditation, and yoga. But remember that mindfulness is a state of being. Things like meditation and yoga are great tools to build our capacity for mindfulness, but mindfulness is really about how you show up in this world. It’s about being present, aware, and non-judgmental about what you are experiencing. This means that you can be mindful everywhere, all the time. Practicing mindfulness involves staying in the present moment, being aware of your thoughts and feelings, recognizing when your mind wanders, and bringing it back to the moment. Similar to what we experienced with the Calm Down Jar, mindfulness is about finding stillness within ourselves. That being said, it takes a lot of time, energy, and effort to build our capacity for mindfulness. Try not to be too hard on yourself. At first, you might spend more time trying to bring yourself back to the moment, than actually being in the moment. That’s okay. Over time, you will find yourself getting better and better, and being mindful will become more natural.

Can I benefit from mindfulness even if I don’t have a mental illness?

Yes, everyone benefits from mindfulness! Regardless of whether or not you have a diagnosed mental illness, mindfulness is associated with reduced stress and anxiety, an increased attention span, better concentration, and higher levels of overall wellbeing. Mindfulness also has many physical benefits: It is associated with improved sleep, a stronger immune system, less frequent headaches, and reduced chronic pain.

What’s the difference between mindfulness and meditation?